Ghost Chili pepper seeds, pre planted in a growing kit, produced by NSL, LLC Magic Plant Farms, are also known as the Bhut Jolokia, Naga Jolokia, and the Bhot Jolokia. The Ghost Pepper Seeds For Sale offers the Ghost Pepper, a chili pepper recognized by the Guinness Book of World Records as the third hottest pepper in the world. The Ghost Chili is now commercially available, as are the two hotter Guinness Book of World Record holders, the Scorpion Pepper, and Carolina Reaper pepper.

Where is the Ghost Chili Pepper grown?

The Ghost Chili, or Bhut Jolokia, originates in the Assam region of northeastern India and parts of Bangladesh. The Ghost Chili is currently grown in the Indian states of Assam, Nagaland, and Manipur, and the Sylhet region of Bangladesh.  It is also cultivated amidst the rice fields of southern Taiwan and can be found growing on small plots in rural Sri Lanka where it is known as the Cobra Chili.

In 2007, Guinness World Records certified the Ghost Chili as the world’s hottest chili pepper. Several pepper growers claim to have hotter Ghost peppers, but offer Scoville heat unit (SHU) figures that are highly controversial among the pepper growing community. More rigorous scientific tests on these peppers are yet to be conducted. The Naga Viper, Infinity Chili, and the Dorset Naga claim to be hotter than the Ghost Chili, and supposedly has an average peak Scoville rating higher than an average Ghost Chili.  The Carolina Reaper pepper and Scorpion pepper are both hotter on the Scoville Heat scale. 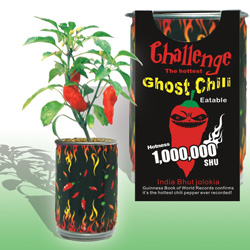 Ghost Chili, Bhut Jolokia, Naga Jolokia, how do they choose the names?

How hot is the ghost chili pepper?